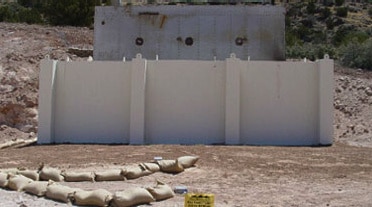 The Adler Blast WallTM is a highly effective blast wall system to protect against the destructive effect of explosive devices. It’s patent-pending modular design, construction and turnkey installation provides a positive physical security and force protection device for blast mitigation that can be rapidly deployed and easily removed. The Adler Blast WallTM is reusable and can be applied to most environments and site conditions for either exterior or interior use.

The Adler Blast WallTM has had unmatched success with the largest up-close bomb threat and largest vehicle weight testing to date. In April 2003, the federal government through the Technical Support Working Group, funded the rigorous testing for resistance to close- in blast loads. A complete report, Field Test of RSA Environmental Structural Delay Blast Wall System Test Report, is available from TSWG.

By absorbing and dissipating the effects of the explosion, including nearly all of the overpressures – the blast’s primary destructive component the Adler Blast WallTM protects building facades and lower floor structural systems that are not designed to withstand the high-energy loads produced by a close-up bomb blast.

In addition, the Adler Blast WallTM, unlike similar protective structures, does not create dangerous secondary fragments.

The Adler Blast Wall’sTM flexible patent-pending modular design and structure provides unparalleled force protection for blast mitigation, The panels can be strung together to achieve a variety of external and internal configurations to overcome stand-off and retrofit issues, as well as stand-alone options for checkpoints, guard posts and critical infrastructure protection.

All Documentation for the Adler Blast Wall is restricted by the DOD and can be obtained through request by Qualified U.S. Agencies or Personnel. Please reply for data through RSA website’s contact section.